Our Mandate:
​We monitor and conduct research on the desert-dwelling Black rhinos.

Save the Rhino Trust was founded in 1982 with the mandate to monitor and conduct research on the desert-dwelling rhinos in the Kunene region.  With support from the Ministry of Environment, Forestry and Tourism, WWF, IRDNC, NACSO, conservancies and local community members, SRT is proud to be part of the drive ensuring that the rhino population has grown and expanded over the past three decades.

Save the Rhino Trust is the only rhino conservation group in Namibia that has a Memorandum of Understanding with the Ministry of Environment, Forestry and Tourism. 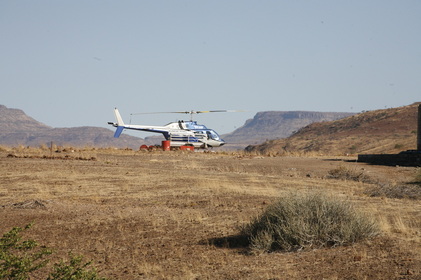 ​Poaching and the illegal wildlife trade is devastating populations of wildlife species throughout Africa and Namibia’s wildlife, including our rhinos, is being targeted by poachers.

SRT has no law enforcement function, but it became clear that monitoring rhinos was no longer enough to keep them safe.  In November 2014 a formal Operations Centre was formed at SRT’s base camp.  Spearheaded by MEFT, a multi-agency anti-poaching effort was rolled out. This includes patrols by ground teams as well as substantial air support (both fixed wing and helicopter). Our efforts are augmented with partner-stakeholders such as the Rhino Rangers, Namibian Police, IRDNC staff and Conservancy Rhino Rangers (CRRs).

SRT is constantly evaluating and adjusting its strategy to deal with this threat, and together we will save the rhino.

Minister of Environment ,Forestry and Tourism Pohamba Shifeta, reported at the end of 2017 that the country wide poaching incidents for 2017 were 27 compared to 60 in 2016 and 95 in 2015. Our efforts are showing results, which is a huge motivator to our teams. However, we stay resilient in our efforts to ensure that we reach a point where we do not loose a single rhino due to poaching.

SRT is working closely with our partners at the Ministry of Environment, Forestry and Tourism (MEFT), conservancies, local communities and within Namibia’s law enforcement agencies to fight back.

The African Rhino Specialist Group (AfRSG) rates the desert rhino population of northwest Namibia as a Key 1 Population, representing the only desert-specific population of black rhino (Diceros bicornis bicornis) in the world. Given that there are only seven Key 1 populations throughout Africa, SRT’s rhino conservation work in the Kunene Region is clearly hugely important, on both a national and international level.

All species living in the rhino range benefit from the reintroduction of rhino, through increased surveillance, patrolling, and monitoring of animals in general.​

​Despite patrols, poaching reached crisis point in 1989.  This called for desperate measures. SRT together with the Directorate of Nature Conservation & Tourism (the former Ministry of Environment and Tourism) de-horned a number of rhinos in an effort to deter poaching. Following the de-horning in the late 1980s, the last recorded poaching event was an isolated incident in 1994.