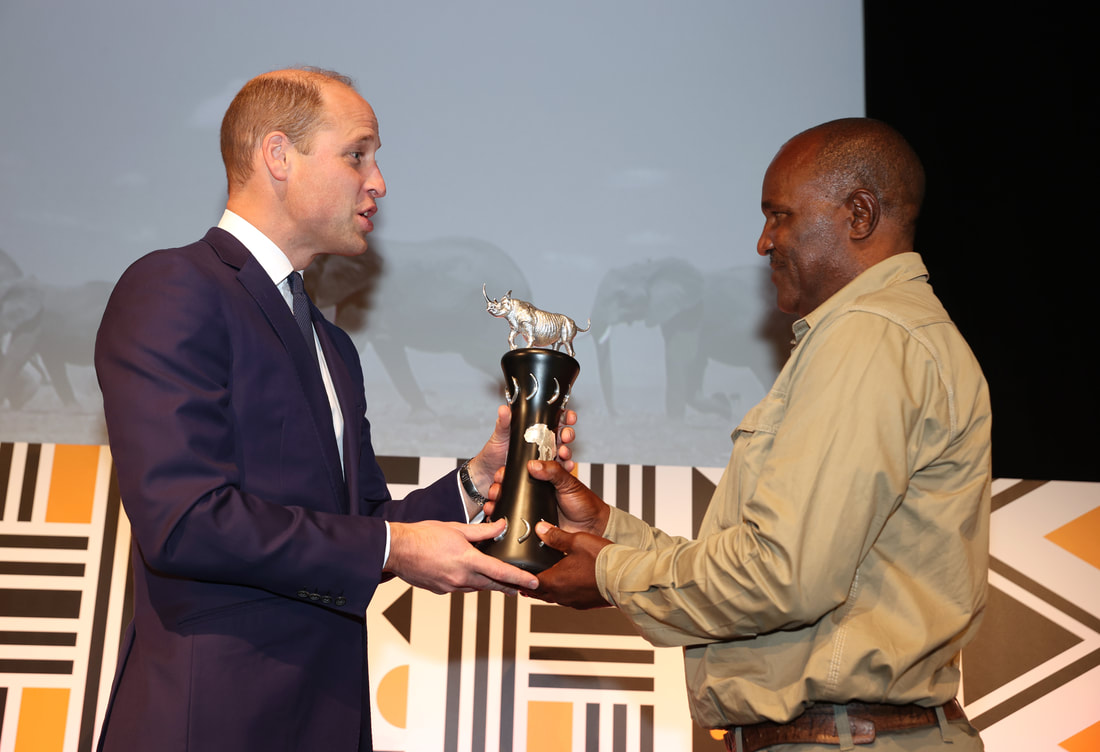 23 November 2021, London United Kingdom. Simson !Uri-≠Khob, Save the Rhino Trust Chief Executive Officer has been recognised for his lifetime commitment and contribution to African conservation.  Mr !Uri-≠Khob  has been awarded the Prince William Lifetime Achievement Award.  The annual ceremony – now in its ninth year – was attended by TUSK’s Royal Patron Prince William, the Duke of Cambridge. Each year the awards recognise and honour the important work that African Conservationists perform to protect wildlife and biodiversity. Arguably one of the most prestigious conservation awards on the continent, the lifetime achievement award is a nod to Simson’s unwavering passion and dedication displayed over 30 years of protecting black rhinos in Namibia’s northwest.
​During his acceptance speech Simson talked about the importance of future conservationists: ‘Conservation needs dedicated, responsible, committed and strong leaders and this is the time for the younger generation to prepare to take over. It may not be a career which makes you rich; however, safeguarding nature for future generations is priceless’.

After the ceremony Simson also thanked his team at Save the Rhino Trust Namibia:  ‘My receiving of this award is thanks to the SRT team who support me at all times with commitment and dedication.  Without their support this award would not have happened’’.

​The impacts of biodiversity loss due to population pressure, climate change and COVID-19 means that now more than ever African conservationists like Simson should take centre stage.  The Duke of Cambridge addressed the 2021 winners saying that the work they do has never been more important and that ‘’it is imperative that the natural world is protected not only for its contribution to our economies, jobs and livelihoods, but for health, well-being and the future of humanity’’.

​Martin has been instrumental in providing technical and mentoring support to dozens of community rangers across Namibia’s north-west and has also led the drive towards sustainable rhino trekking tourism in the region:  https://www.conservationawards.africa/