Click on the image to view our latest newsletter.
22 September 2017

This year Save the Rhino Trust (SRT) celebrated its 35th year of existence. It has taken a huge amount of consistent hard work in a very challenging and tough environment to survive often challenging times. From the point of near extinction, the rhino population has rebounded. SRT has had great success in reducing poaching within the Kunene region and has seen its rhino population triple since its inception. However, we could not do this without the support of our generous donors.

Just in time for World Rhino Day came the announcement from the Debmarine-Namdeb Foundation that they will be sponsoring 3 vehicles to the value of N$1.5 mil to SRT. “As CEO of Save the Rhino Trust it is my honour to personally convey our gratitude for the support and cooperation we have been receiving from Debamarine Namibia and Namdeb”, said Simson Uri-Khob.  “These vehicles will contribute to our ability to patrol and monitor the area and update the largest and longest running database of these animals. Furthermore, SRT conduct joint patrols with key law enforcement officers, provide enforcement support and training, assist with the investigation of poaching incidents”.

The extremely erroneous and harmful belief by some that rhino horns can cure illnesses such as fevers, blood disorders, gout and cancers has brought all five remaining species of rhino to the edge of extinction. Wildlife organisations face an uphill battle against highly sophisticated and pervasive poachers. Protecting some of the most at risk animals on the planet requires considerable resources, significant aid and enduring dedication. SRT is totally reliant on aid such as provided by corporates and individuals to support the defense and conservation of these otherwise helpless animals. “We operate in a remote, rugged area of more than a million hectares, with few fences, no national park status and no controls over who goes in or out.  Working closely with the Ministry of Environment and Tourism, local communities and NGOs by the end of 2011, Namibia’s northwest black rhino population had more than quadrupled since SRT’s inception. Our dedicated teams of trackers go out on daily patrols to monitor this last truly free-ranging population of black rhino in the world. Winning this battle is only possible if we stand shoulder-to-shoulder with like-minded individuals and organizations to ensure criminals do not destroy a large part of Namibia’s natural heritage” said Uri-Khob.

Commenting on the donation, Debmarine Namibia CEO – Otto Shikongo said, “as we celebrate World Rhino Day, we would like to pay tribute to the men and women in law enforcement, the Ministry of Environment and Tourism and our partners, SRT, for their continued efforts to safeguard our precious rhinos for future posterity. As a company involved in mining, we uphold sustainability as our focal success point. Nowhere is sustainability more critical, than in the natural environment to protect our wild-life and vegetation; which in turn is essential for the continued survival of humans. We wish SRT well with their endeavors, and trust that the vehicles will make a big difference in the battle to protect the rhino.”
14 September 2017

Martin Nawaseb (second from right) and Boas Hambo (middle) received the award from from the South African Minister of Environment Edna Molewa.
The Rhino Conservation Awards held in South Africa, celebrated conservationists who have made a marked impact in the war against rhino poaching. With a holistic view of rhino conservation, the Awards honour those that strive to limit risks and vulnerabilities within their specific areas of expertise: from field rangers to conservation practitioners; conservation supporters; political, investigative and judicial supporters; and endangered species conservationists.

The winner of the Conservation Practitioner Award was the Kruger National Park’s Marula South ranger team. The runner up was Save the Rhino Trust’s Conservancy Rhino Ranger Incentive Programme.  “I was very happy to be able to attend the event, to meet so many rangers from across Africa and of course to bring back an award to Namibia.  It really felt great when they called our names and everyone cheered, especially the Namibians in the crowd!” said Boas Hambo, Rhino Ranger Northern Field Coordinator. “It is very exciting to be recognized by our peers from all across Africa.  This is truly a team award, one that so many individuals and institutions working at the coal-face of rhino conservation in north-west Namibia can be proud of. For conservation efforts to be successful we need a collaborative approach with efforts being made by a variety of passionate contributors” added Dr Jeff Muntifering, Save the Rhino Trust Science Adviser.

The Rhino Conservation Awards have been held annually since 2012, celebrating those that continue to fight in the rhino poaching war, under the patronage of Prince Albert II of Monaco. The Awards were founded by Dr Larry Hansen and Miss Xiaoyang Yu in collaboration with the South African Department of Environmental Affairs and the Game Rangers Association of Africa. 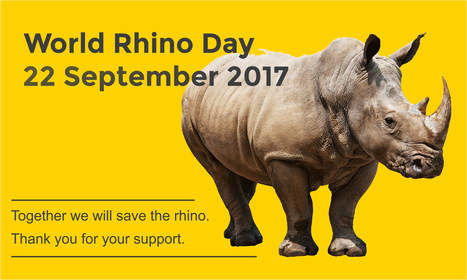 World Rhino Day
​World Rhino Day was first announced by WWF-South Africa in 2010. The following year, World Rhino Day grew into an international success, encompassing both African and Asian rhino species, thanks to the efforts of two determined women.
​
It all started with an email: In mid-2011, Lisa Jane Campbell of Chishakwe Ranch in Zimbabwe was already planning ahead for World Rhino Day. She searched online for ideas and potential collaborators, and found Rhishja’s blog. Lisa Jane sent Rhishja an email, and the two found they shared a common goal of making World Rhino Day a day of celebration for all five species of rhino. In the months that followed, they worked together to make World Rhino Day 2011 an international success, both online and offline. World Rhino Day has since grown to become a global phenomenon, uniting NGOs, zoos, cause-related organizations, businesses, and concerned individuals from nearly every corner of the world!

SRT Celebrates Strengthened Partnerships
On Thursday 8 June 2017, Save the Rhino Trust’s Field Base at MaiGoHa was alight with excitement as donors and partners came together to celebrate the inauguration of its upgraded solar supply system.

Read more about it here. 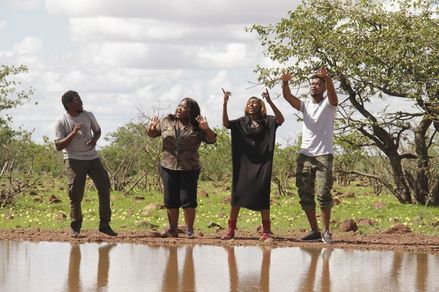 29 May 2017
It's official! Save the Rhino Trust's music video, 'Stand Together' has been released into the world! You can access the video here.
​
Please help us spread the word by sharing the video via your networks.

You can also show support by purchasing the 'Stand Together' song, here. Or by donating to our cause to save the rhino from extinction, here.

Lyrics and a translation of the local languages can be found here. 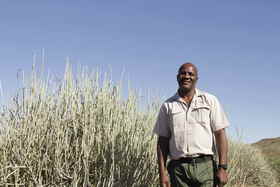 Welcome to a new era in rhino conservation!
"It is a real privilege to re-introduce our newsletter as we celebrate a new era in rhino conservation.
With the instigation of intelligence operations, advanced technological assistance, a creative national outreach campaign and strengthened local and international partnerships, Save the Rhino Trust is positive about the future of the last free-roaming population of desert adapted black rhino."
Simson Uri-Khob, CEO, Save the Rhino Trust

Let's stand together before we lose them forever!
​The song is available for purchasing here. 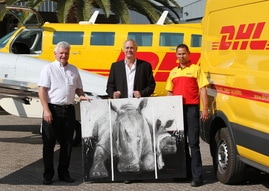 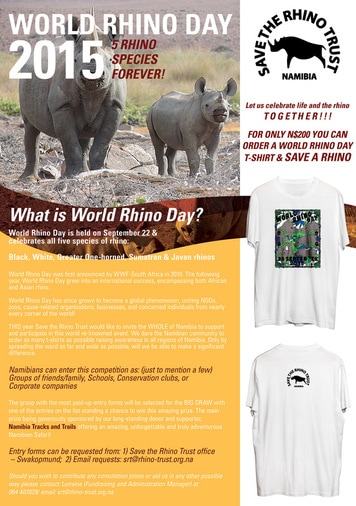 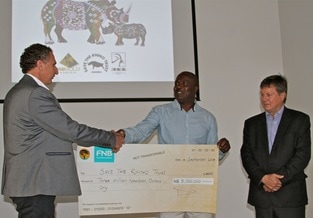 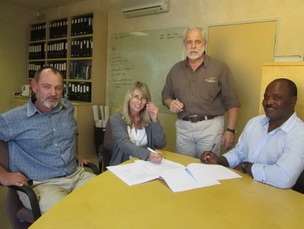 Download File
16 January 2015
﻿Namibian Minister warns poachers.﻿
http://www.news24.com/Green/News/Namibian-minister-warns-poachers-20150116
7 January 2015
How black rhinos and local communities help each other In Namibia.
http://news.mongabay.com/2015/0107-hance-muntifering-interview.html
31 December 2014
Press Release: Save the Rhino Trust on the offensive, coordinating efforts with Kunene Rhino  Protection
“Our rhinos are under siege, and SRT is going on the offensive,” said the Honourable Dudu Murorua, Chairman of the Save the Rhino Trust Board of Trustees.

Download File
November 2014
Report on the progress of the Rhino Ranger programme in Kunene, Namibia
Download file below: